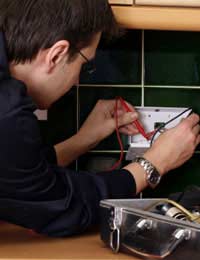 Every now and again, no matter how much you've tried to follow the rules and guidelines for obtaining a reliable and professional tradesman, you'll possibly end up encountering a rogue trader. A rogue trader is usually someone who is trying to scam you out of some money and they're renowned for carrying out work to a poor standard, if they even finish it at all. Due to the increase in rogue traders over the last few years, many local authorities and government bodies have set up a variety of legal schemes to help you avoid rogue traders. Government surveys have suggested that between 38-68% of households feel at risk from scam artists and most didn't know where to go for help should they feel they've been conned. In particular, single mothers and the elderly appear to be the most common targets for rogue traders, but now there are a variety of places to turn to should you become a victim.

One of the most prominent government schemes in relation to rogue traders is the TrustMark Scheme, a government backed association between consumer protection groups and construction industry bodies, that vetoes and checks workmen before allowing them to be accepted. The Office of Fair Trading receive around 100,000 or more complaints a year from people who are unhappy with the standard of work they've received from a tradesman they've employed. The TrustMark scheme will provide a logo for tradesmen who are approved and who have had their skills checked, their work inspected and are financially viable. The great thing about the TrustMark scheme is that it covers all areas of tradesmen - from builders to gardeners. Other ports of call when you feel that you're the victim of a rogue trader is to contact the Trading Standards Office. They should be able to advise you of whether you have any kind of fallback from the situation you're in. Of course you can also always contact a good lawyer should you feel you need one, but using government approved tradesmen in the first place should enable you to avoid the rogue traders.

Many local councils and authorities receive numerous complaints about rogue traders in their area and have decided to create effective ways of not only stopping people being victims to them, but stopping the rogue traders initially. Brighton and Hove have a series of Rapid Action Teams that act on behalf of homeowners and attempt to prevent rogue traders in the community.

Areas such as Sutton have their own Rogue Trader Days where they alert local residents to dangerous rogue traders and educate them through the Safer Sutton Trader Scheme - a directory of reliable and reputable traders in the area. These kind of schemes are part of a larger campaign entitled 'Be Safe and Sure at Your Door' in the area that attempts to halt doorstep crime and trading that can be considered illegal.

Many councils are now setting up this kind of system to help their residents avoid becoming a victim of a scam artist. Other legal schemes such as 'The Competent Persons' Scheme' which is offered by the APHC (Association of Plumbers and Heating Contractors), is a scheme that has been set up to encourage the plumbing and heating industry to work in conjunction with consumers to ensure people aren't ripped off by illegal traders. Many legal schemes of this type exist and often the best way of finding them is to either contact your local trading standards office or look online at your local council office website.

What to Look Out for With Electrical Testing Companies

Avoiding Rogue Traders, Before it's Too Late

Top Tips for Avoiding Rogue Traders
Share Your Story, Join the Discussion or Seek Advice..
I have just been jumped by a trader working under Elite roofers who users the name Martin who gives a quote then keeps finding issues which require more work and requires payment up front to purchase materials but never turns up to do the works with lots of excuses. Then when he lets you down over and over and you cancel the works if gives excuses why he can not pay you back as he has spent the money but has no details on what and states he is returning the money but never does. Check out for Elite roofers and. Martin and son they cannot be trusted
Sam - 27-Dec-19 @ 9:37 PM
Title:
(never shown)
Firstname:
(never shown)
Surname:
(never shown)
Email:
(never shown)
Nickname:
(shown)
Comment:
Validate: