What to Look Out for With Electrical Testing Companies 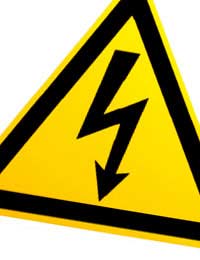 One doorstep scam that’s been doping the rounds for several years now and occasionally experiences a bit of a resurgence once we’ve forgotten about it, is what has been called the ‘electrical wiring scam’ or ‘electrical testing scam.’As a responsible website, of course we’re at pains to point out that not every contractor who offers to check your wiring is out to rip you off. There are several reputable companies in existence who will tell you whether your wiring is out of date and needs replacing. The people that cause the problems are the companies that, when short of legitimate business leads, train their representatives to go round to people’s houses, and frighten them into paying out to have all or part of their electrical system replaced because it ‘doesn’t conform to current standards’ – thus worrying the consumers in question half to death because they are convinced that their wiring is unsafe and could result in all sorts of mishaps and potential dangers.

The people that these companies prefer to target are the elderly and vulnerable. Anyone living in an older property that looks as if it’s been lived in a while could well be ripe for a visit from a salesman who carries out a ‘wiring test’ which naturally comes to the conclusion that there’s a defect in the existing wiring that needs to be rectified and pronto.The first you’ll know about the situation is when a very respectable looking representative calls on you out of the blue and asks whether you know if your wiring complies with current safety standards. Of course, it’s probably not something you’ve thought about in a while, so when he offers to come in and give your property a ‘free electrical safety check’ you might think he’s just being helpful. Well, there’s always a catch.

The salesman will show you all his credentials and will more than likely be a member of a relevant trade association. The problem is that trade associations such as the NICEIC, while they do ensure that the contractors who are members comply with all the relevant safety regulations and are properly trained, don’t actually have an awful lot to do with the sale techniques of the companies on their books. So membership of an important-sounding trade body doesn’t necessarily mean they are reputable.

After the engineer has spent twenty minutes or even less testing the equipment and wiring in your property, he will no doubt come to you with a very concerned face, telling you that your wiring is totally out of date, bombard you with technical reasons about why it could potentially be unsafe and would of course “never pass an electrical safety test” and suggest that you have all, or part of it, replaced.

The problem with these doorstep contractors is that although they may be right in a way, and if you have an older electrical system it might well be out of date, or not word the way that new homes would be, it doesn’t automatically follow that the wiring is unsafe.

Another issue is that the costs that are quoted for the work that’s allegedly needed to bring the wiring up to current safety standards are usually high. The quote might cover work that could be desirable but not vital, as well as in some cases work that doesn’t need doing at all.

What to Do if Approached by an Electrical Safety Testing Company

It’s fine to let them in and test your wiring, but take their results with a pinch of salt unless you’ve specifically contacted them because you have a particular electrical safety concern. Take the results of the test, don ‘t agree to anything, and ask another contractor for their opinion – and a quote for doing any necessary work – before you go ahead with anything.

If you are talked into signing for any work, the Doorstep Selling regulations give you protection. If the work quoted for was to have cost more than £35, you have at least seven days to cancel any agreement or contract. The agreement should also set out the cancellation terms, telling you that you have a seven-day cooling off period. If it doesn’t, the trader can't hold you to the contract, and might even have committed a criminal offence, so not only should you cancel in writing immediately, you should also contact your local authority Trading Standards Service.

Write to the company straight away, telling them that you’re exercising your rights under the Doorstep Selling Regulations to cancel the contract. You can email for speed, but send a recorded delivery copy of the letter and keep a copy for yourself in case they say they haven’t received it.

Avoiding Rogue Traders, Before it's Too Late