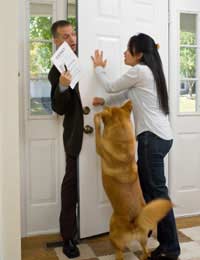 If you're in the market for a new driveway or patio, you're probably thinking of every way you can to save money. Nobody wants to pay a small fortune for something like a driveway that is usually more practical than aesthetic, or for a patio that may not be used for much of the year, so it makes sense to seek out a good deal before committing to a contract with a builder. For many people, the need to save a few pennies can lead to them considering door-to-door driveway or patio salesmen, or going with the cheapest offer to carry out the work. Unfortunately, this often means that taking the cheaper route can lead to long term problems and more money eventually as you find yourself the victim of a driveway or patio scam.

Sadly, it's becoming more common for salesmen to go knocking on doors looking for business when it comes to driveway paving scams. Normally the process that is involved in this will be that a workman will knock on the door and point out a problem with your existing driveway. He will then tell you that he's in the neighbourhood working on another customers driveway and he had some left over materials that means he could do your driveway for you at a reduced price. Then the offer will come of a reduced price for a short period of time only. Normally, the rogue trader will pressure you slightly into making the deal there and then at the door. Once they have you agreed to a deal, the next step is to ask for cash up front to 'ensure you'll pay'. It is absolutely mandatory that you know there is no way that you should ever pay anyone cash at the door, especially when they haven't even conducted any work on your premises.

Most driveway scammers of this type won't even have conducted a full inspection of your property and therefore probably have no genuine idea as to the exact costs involved or the length of time it'll take. You'll often find that if they do complete the work, it will be to an inferior standard than a company who don't have to go around touting for business door-to-door. In a worst case scenario, you will pay money for a job that is never completed and as is the case for most door-to-door salesmen, they won't have any contact details other than their mobile which is unlikely to be available most of the time.

Essential Points to Look Out For

Patio scams are fraught with much of the same issues as driveway scams - door to door salesmen usually aren't the best route to take if you're looking for quality work. The difference is that with some patio dealers, they do go door-to-door similar to double glazing salesmen, so they aren't always rogue traders. Overall though, good patio fitters will have lists of people waiting to have work carried out by them and shouldn't need to go door-to-door looking for work. Follow the same cautions with patio traders as driveway scammers. Avoid special offers for cash, being pressured into signing straight away and not being fully aware of your contract and your rights to cancel.

Protecting Yourself from Driveway and Patio Scams

The only way to protect yourself from driveway and patio scams is to always ensure you use a reputable tradesman who is part of a governing body or trade association. In the UK, many reliable tradesmen will be part of the TrustMark scheme to ensure that customers know they are professional in their trade.

Always use a tradesman that you have a good vibe about also. If something feels too good to be true, it usually is. Ideally, you shouldn't even get into discussions with a tradesman who approaches you at your home. Speak to friends and family about tradesmen they've used in the past and then try and hire them. Also, make use of online information sites that outline the positive and negatives of traders in your local area. Always go local, this will ensure you have a point of contact near you also. If you do find a tradesman whom you feel may be a rogue trader, get their number and contact your local trading standards authority. They will advise you on what to do from there and can provide you with information about whether you can help others avoid becoming involved with a rogue tradesman who promises you a fabulous driveway or patio at a reduced price.

The Ten Most Common Trader Scams