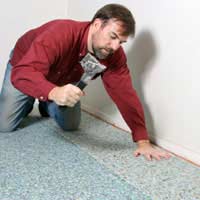 Most people will hopefully never have to deal with an unhappy encounter with a tradesman, but for the few that do, it can be a very stressful and worrying time. If you’ve had work carried out on your home and you are unhappy with the outcome, there are a variety of different routes you can take to try and have the matter resolved. Although they may seem daunting at first, remember that you’re paying someone whom you consider to be a professional to conduct work on your behalf. If you feel they haven’t lived up to their side of the contract, then it’s entirely within your rights to pursue it further.

If you feel unhappy about work at your home, the first point of contact should always be with the individual who carried out the job for you. Most reliable tradesmen aren’t going to want their good name tarnished, so they’ll be open to listening to your complaints about any work they’ve conducted for you. If you feel that you can’t speak to your tradesman, contact the owner of the company he or she works for and if they are the owner then your next step would be contacting the trade association that governs your tradesman. If you really feel that you have to take this approach, it’s better to ensure that you know exactly what your contract specifies with regards to being unhappy with your tradesman.

A Good Contract Saves a Lot of Stress

Many people also add in a clause that states that they don’t have to pay until they’re fully satisfied with the job. This is a great way of ensuring that your tradesman is always willing to fix any problems and be available to talk about any issues you’re having. If they aren’t getting paid, they’re going to want to get things wrapped up as soon as they can so the money is in their bank and not yours. Another great aspect of checking your contract before approaching outside agencies for help is that you’ll fully know your rights and know what legalities you’re entitled to through the contract. If you’re unhappy with your tradesman, but your contract has no provisions for that, you could be facing an uphill battle. You can however cancel a contract with a tradesman and employ another if the original tradesman has failed to complete the work to your satisfaction after a specified time limit.

Getting Help from Outside Agencies

If you feel you’ve exhausted your personal contacts with the tradesman or his/her firm, it’s time to look for outside help. You can find many useful mediation points in outside agencies who specialise in helping customers deal with tradesmen they’re unhappy with. Your first stop should be to look for some kind of arbitration scheme, but remember that when a decision is made through such a process, it is binding. You can’t then take the tradesman to court if you’re unhappy with the decision made. Another option is to speak to your local Citizens Advice Bureau and ask for their advice. They can often provide you with a variety of options to pursue before you have to go down the road of local courts and large legal costs. You can also speak to a private solicitor if you have one, as this way you’ll be dealt with in a timely manner and on an individual basis. This will cost you though, so ensure that all other avenues have been exhausted before trying this.

Sale and Rent Back Schemes: Scam or Not?

Why Use The FMB?